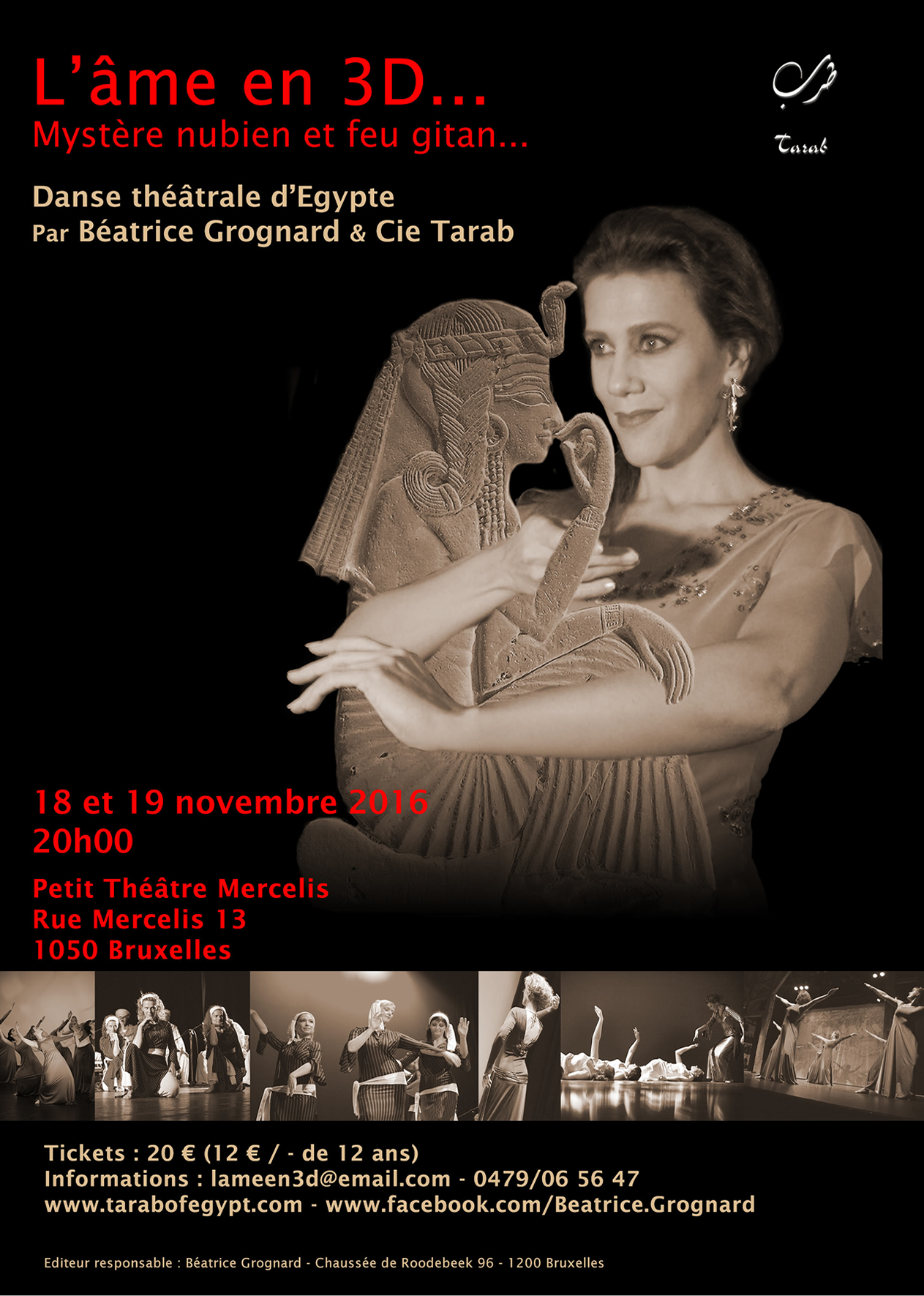 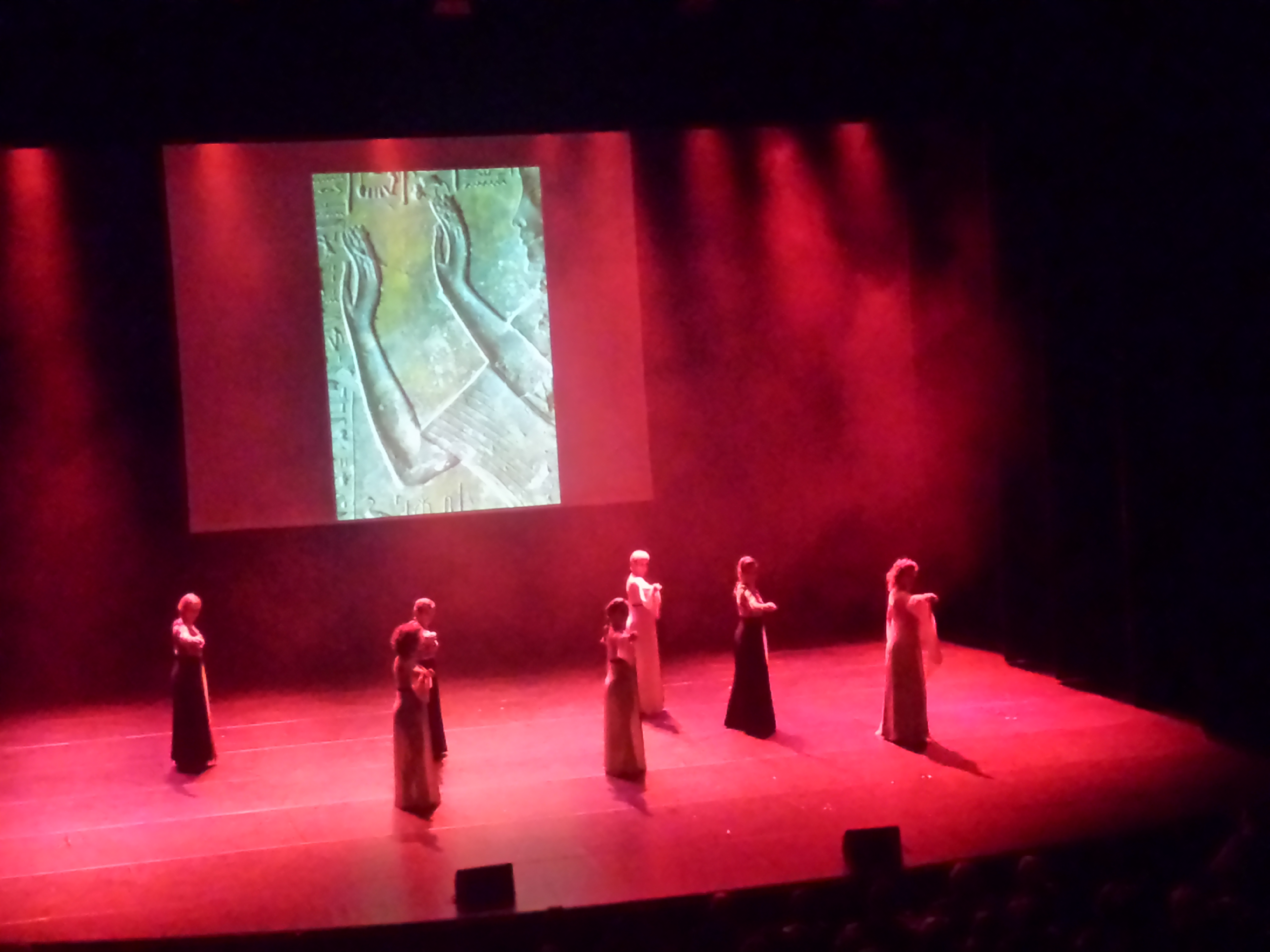 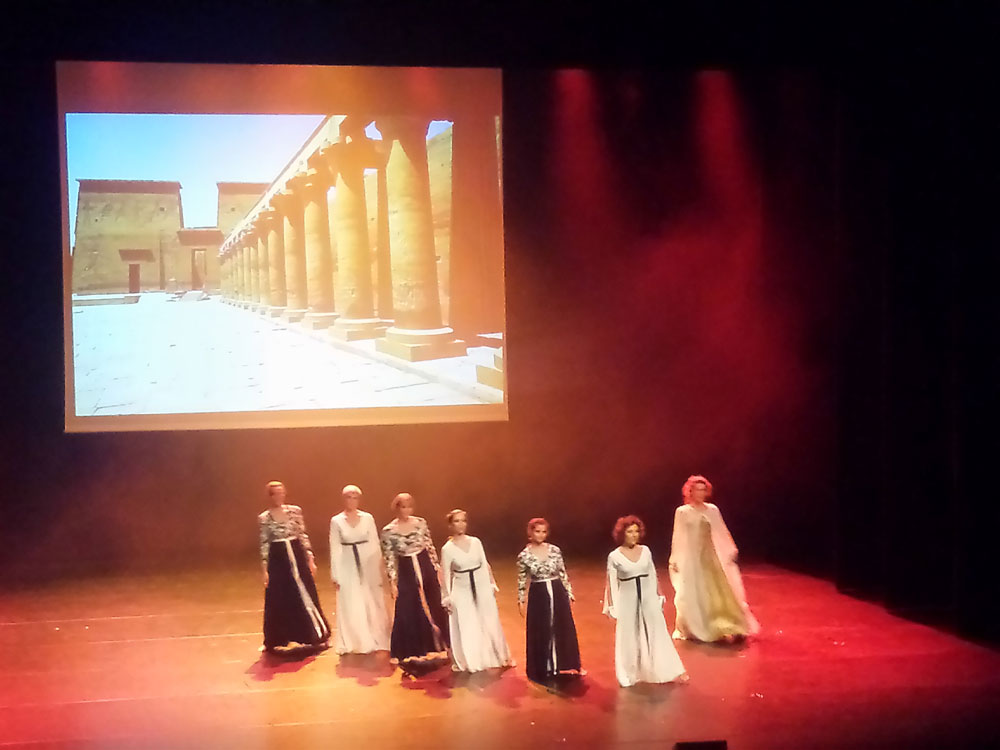 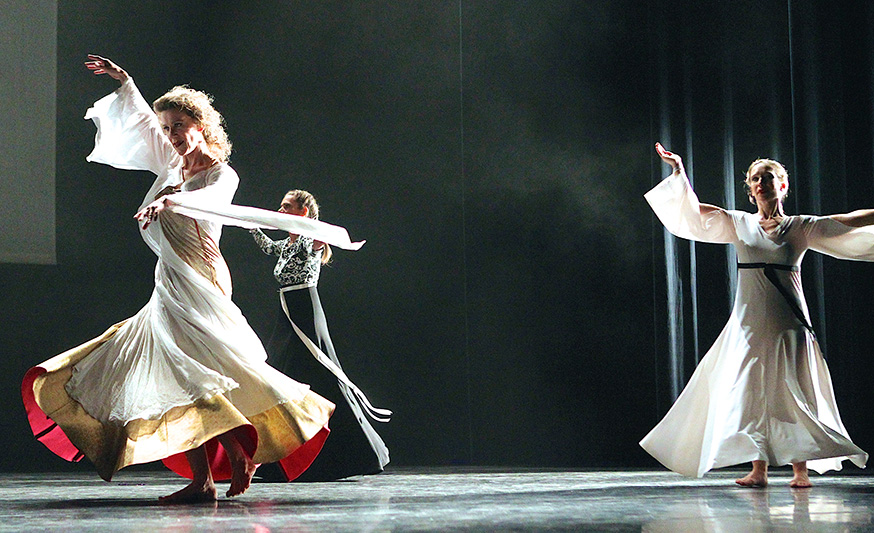 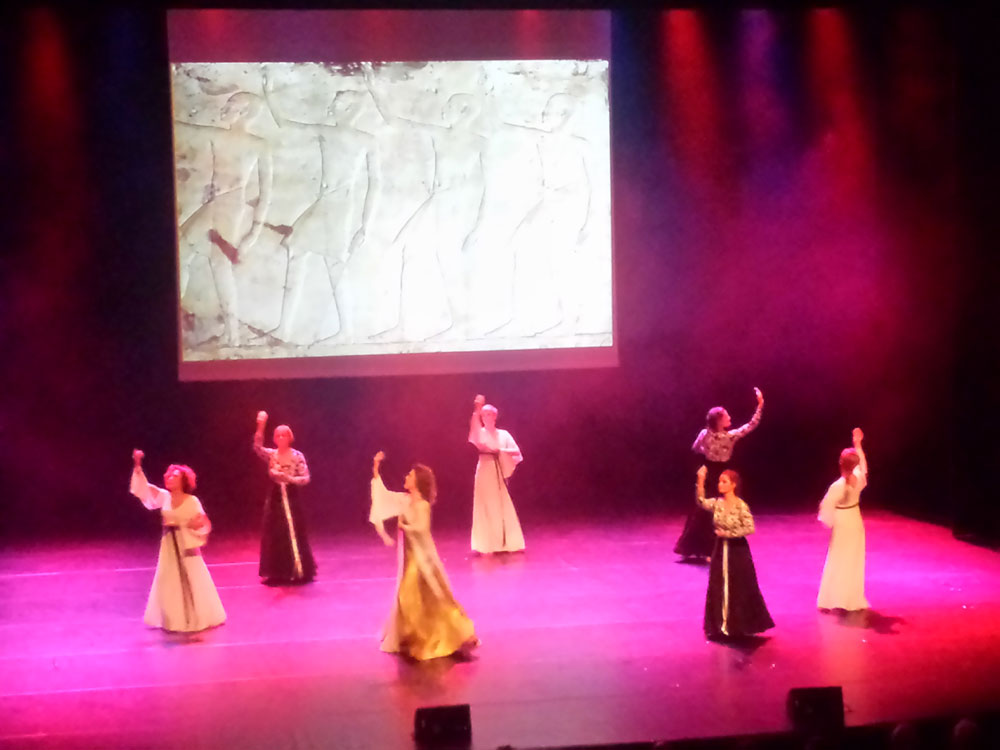 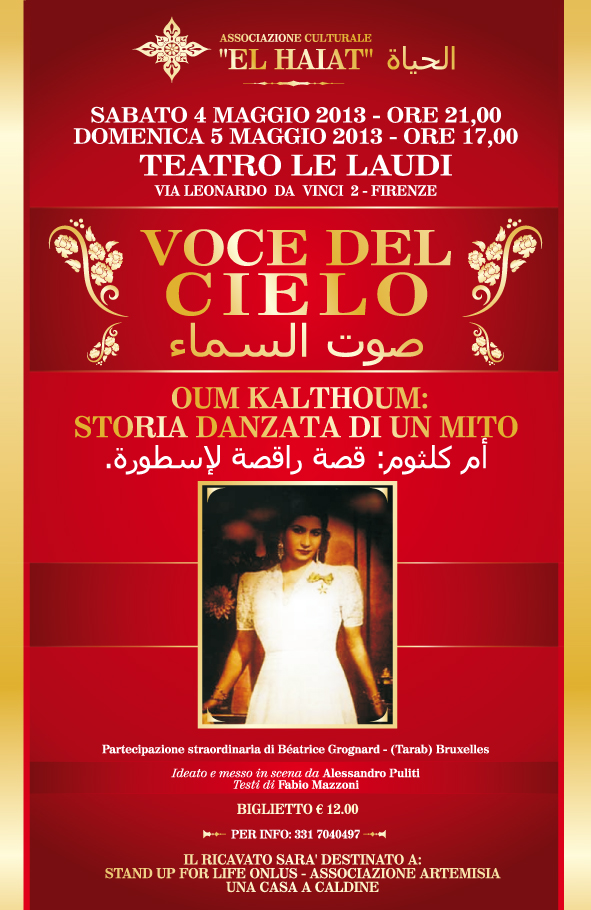 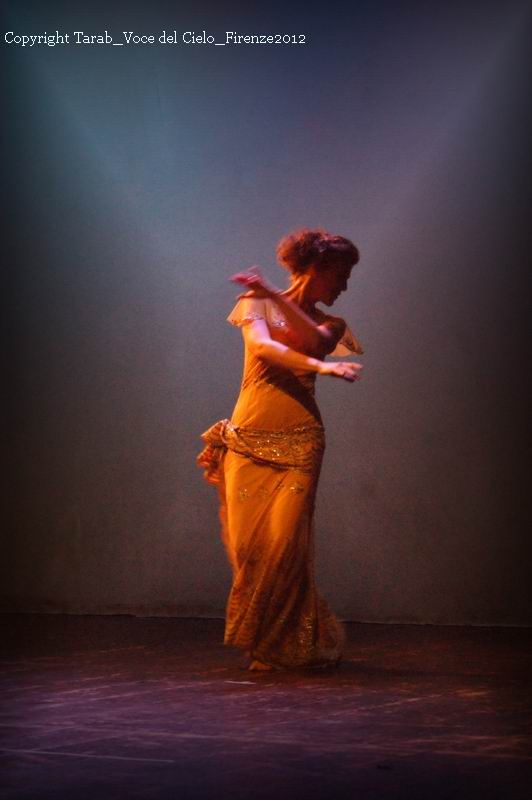 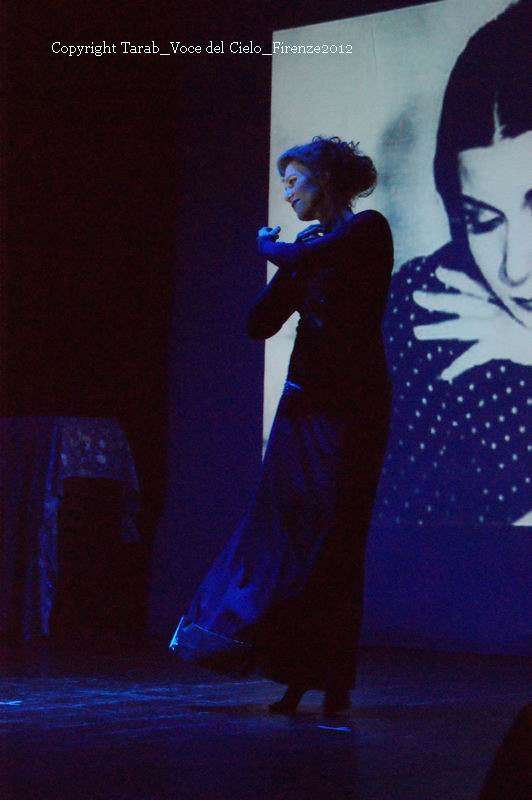 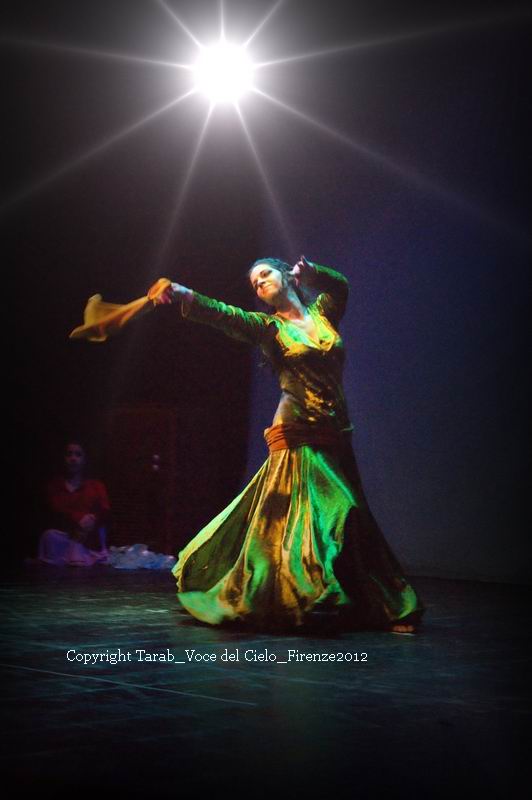 "Dream of an Egyptian night"

The legend of the goddess Hathor 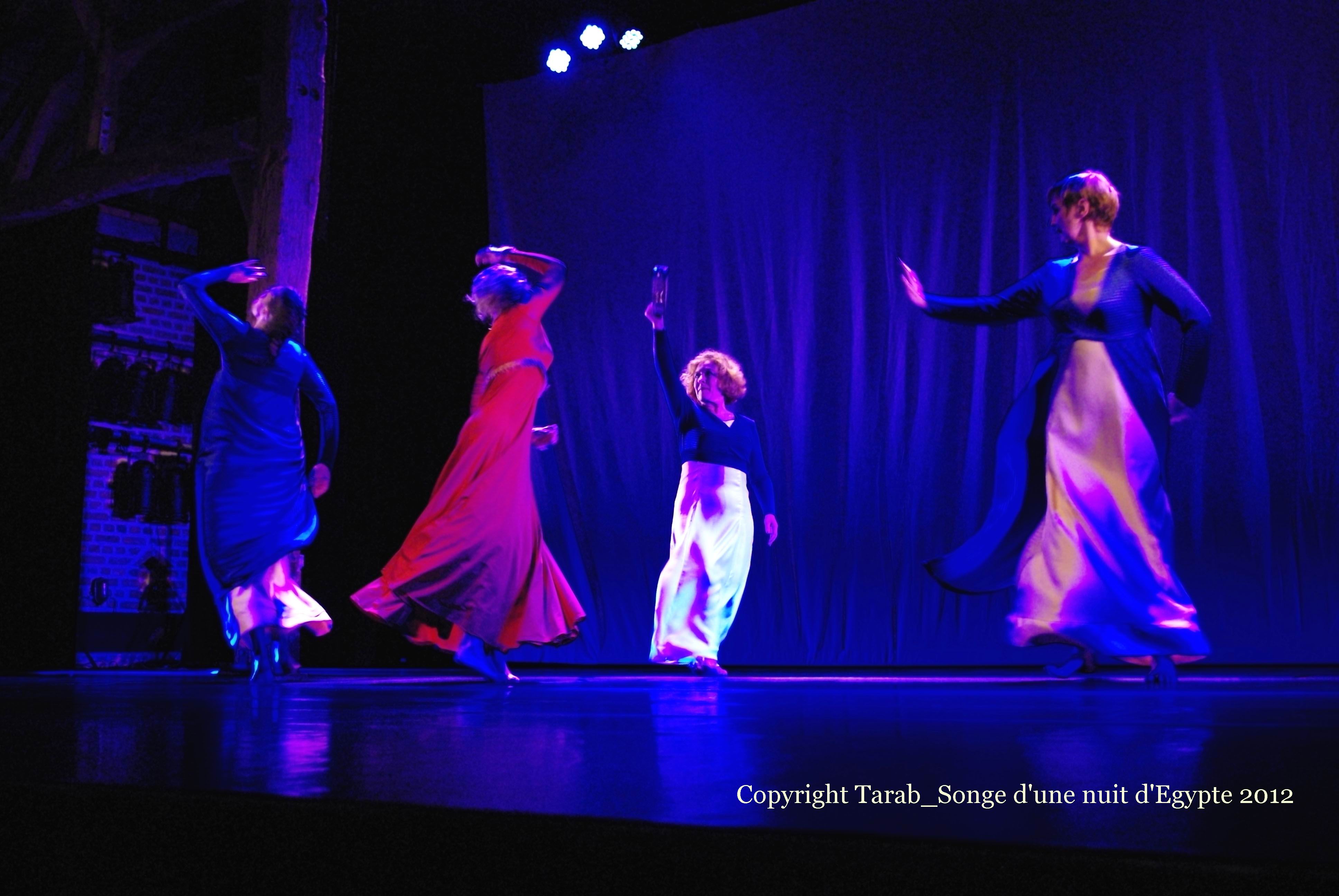 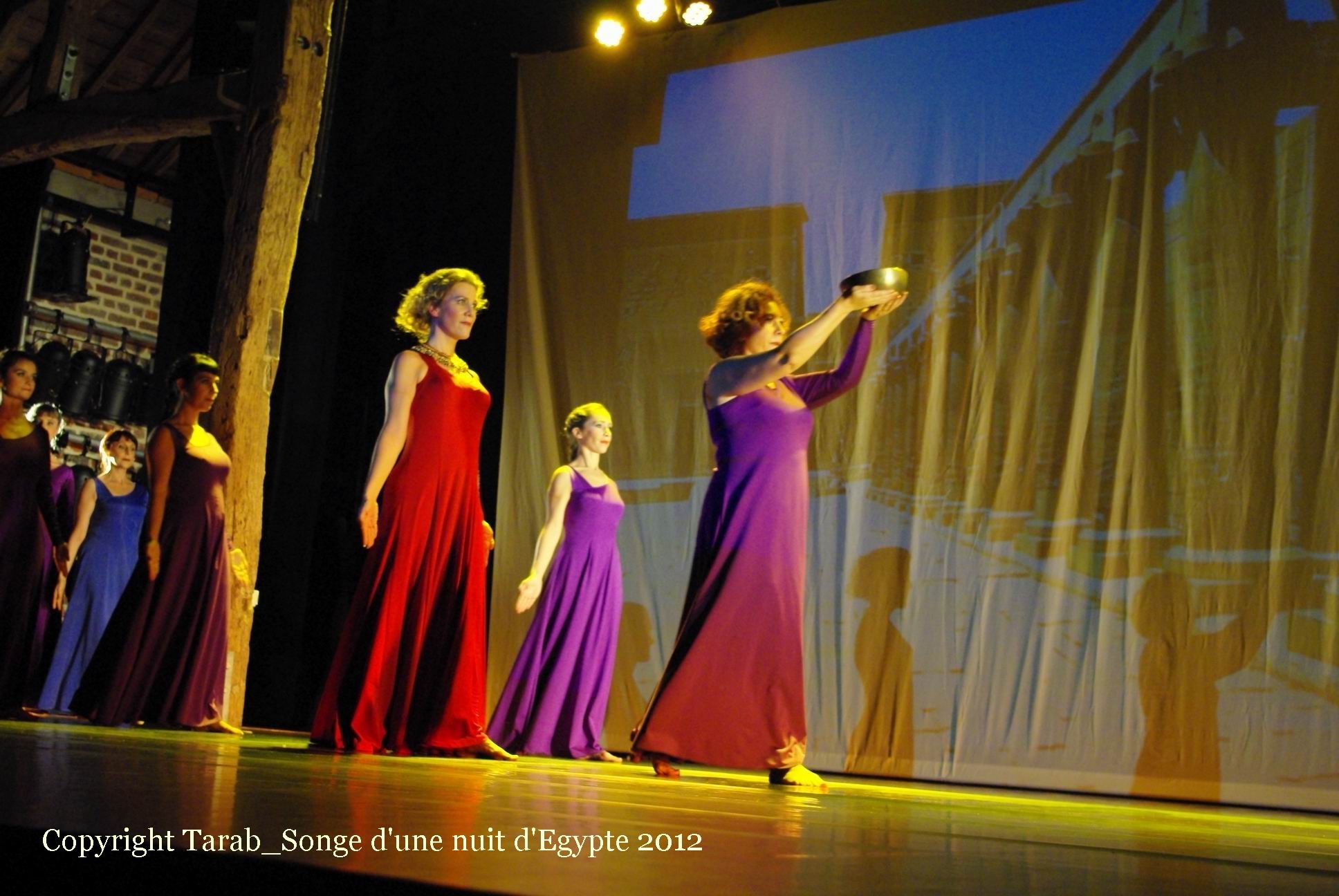 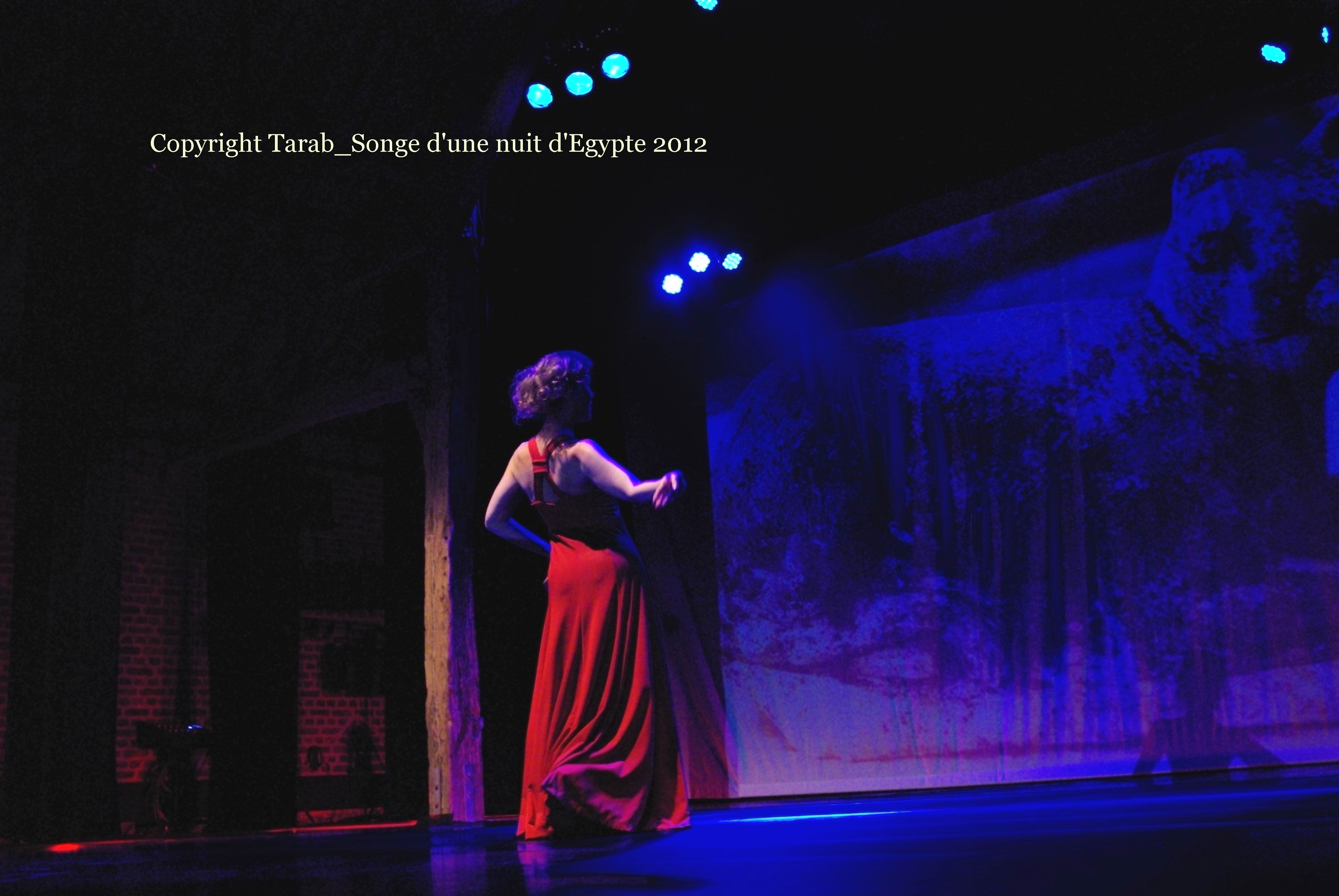 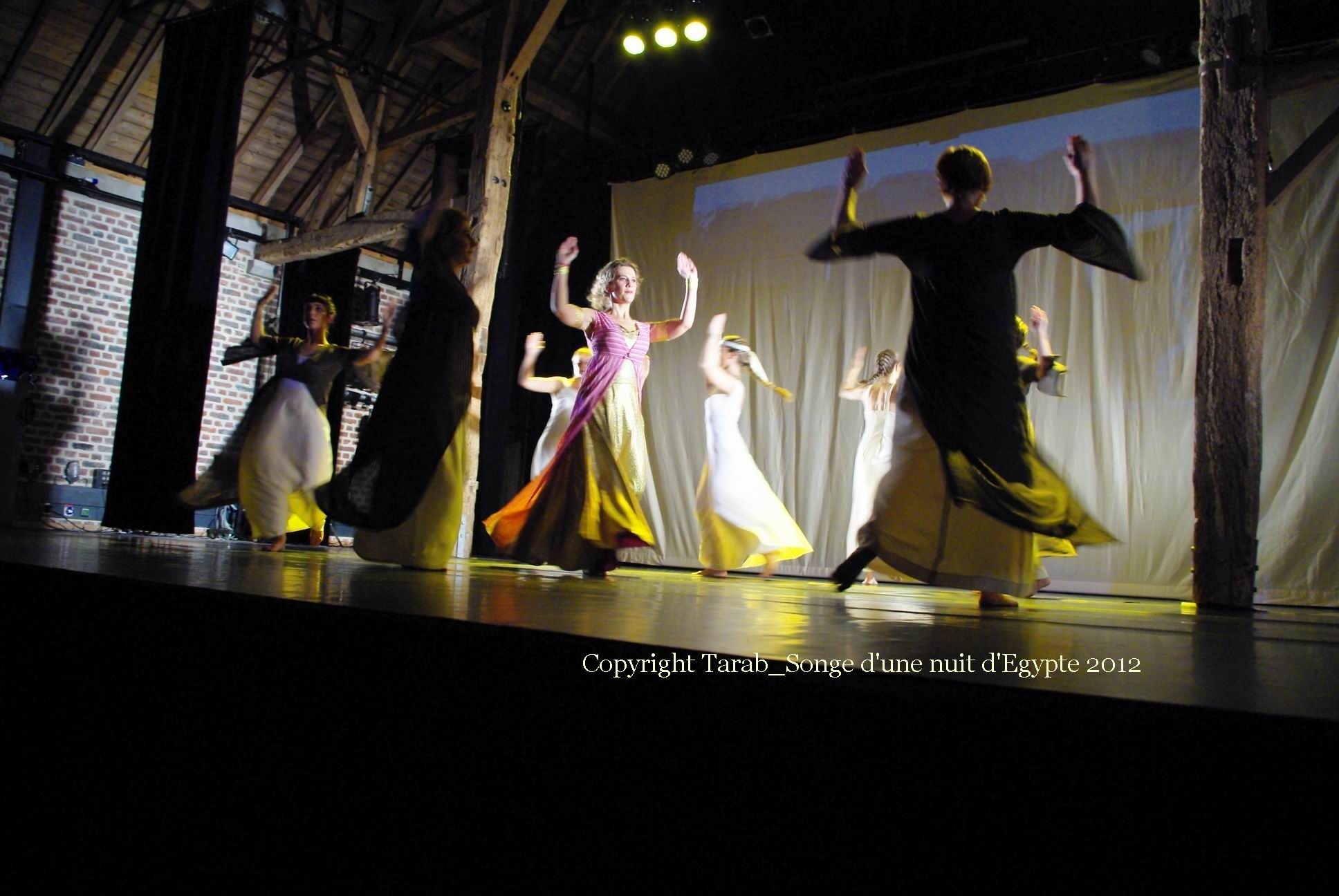 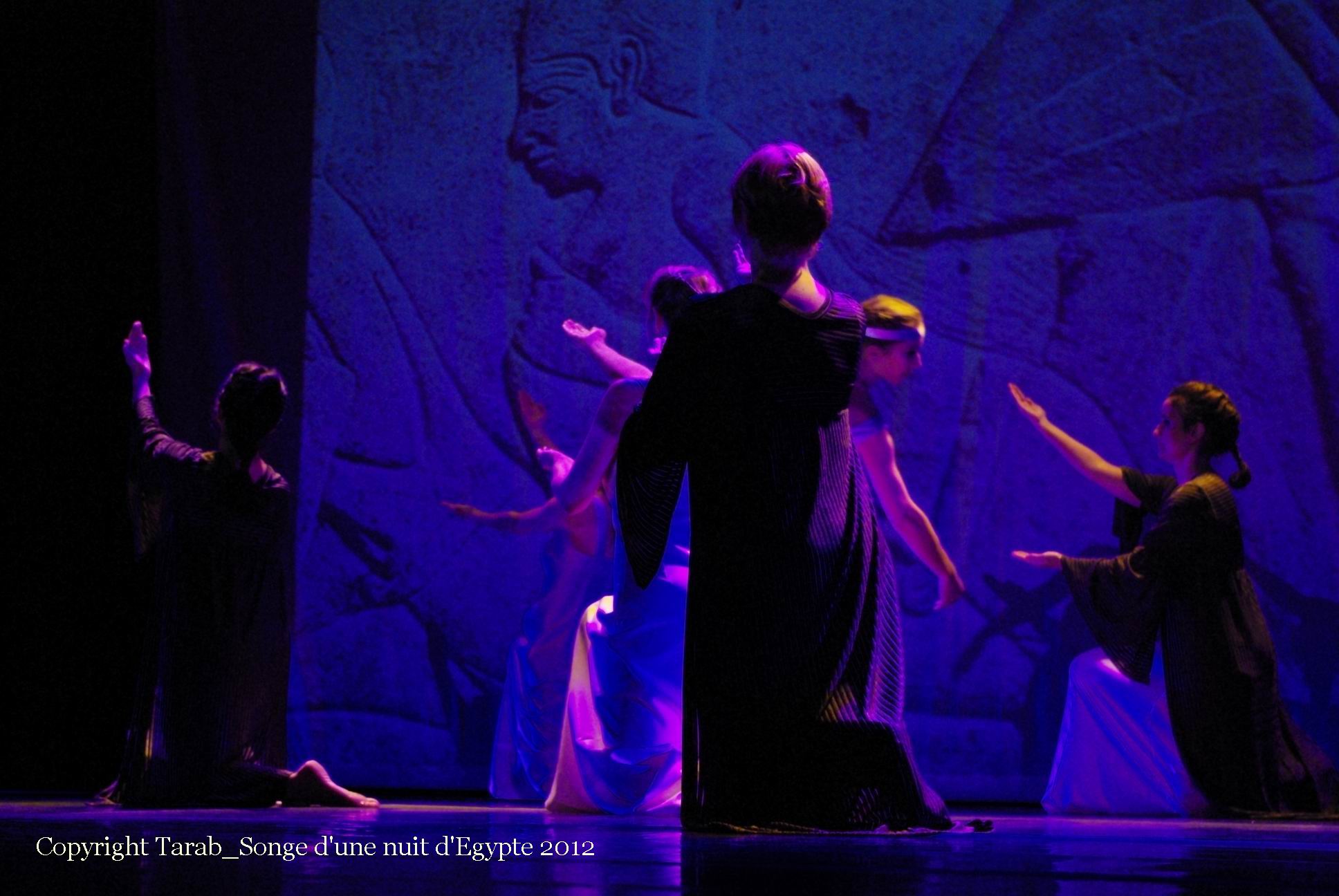 « …When the goddess Hathor, incarnated by Béatrice Grognard comes on stage as a bloodthristy lioness, she electrifies the whole theatre with her incredible sensuality… The solist’s dancing bewitches the public of the amphitheatre… Her deep-rooted dancing touches our innermost feelings and beasty instincts… »

« Characteristic for this performance is its central archetype, feminity, exalted through a search for beauty in the movement… This creation respects the tradition, blending it with very innovative elements that make this performance fascinating… »

« The sober and minimalist stage design, perfectly in line with the whole performance, is supported by the constant showing of images, sculptures, paintings, bas-reliefs that enables the bedazzled public to remember past wonders… Meanwhile, the shadows of an ancient dance lull the bodies into a divine charm… »

« Dream of an Egyptian night »

The legend of the goddess Hathor has enabled Beatrice Grognard and her dancers to plunge into the dazzling artistic and intellectual richness of Egypt of the pharaohs. Thanks to its musical excerpts drawn from numerous Egyptian repertoires and to the projection of paintings, sculptures, objects and antique sites, Dream of an Egyptian Night aims to celebrate an art of thousand years combining both ancient Egyptian spirituality and sensual pleasure and to reflect Beatrice Grognard’s fifteen years of research and creating performances.

« Intense, subtle and beautiful performance, reflecting a rare creativity which stems from deep and patient questioning of your art…»

« Every performance that you bring to us is a totally new experience... Your choreography beautifully expresses the evolution of the story...»

« The audience was just under the spell of this permanent and magical « Dream ». The dancing was in accordance with the subject and your interpretation took us on a journey to faraway lands… »

« Extraordinary presence on stage. This performance was just perfect. It evens those of Maurice Béjart… » 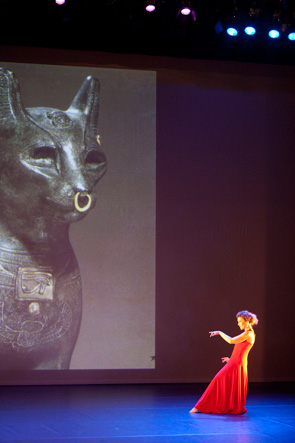 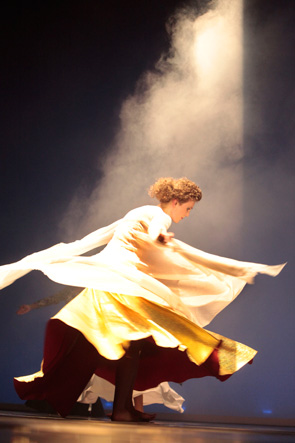 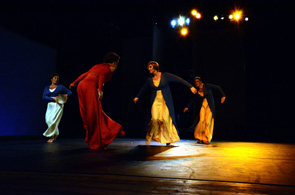 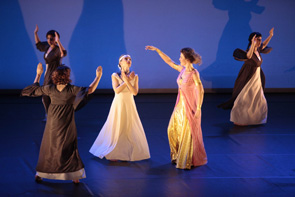 Choreographer and dancer Béatrice Grognard, surrounded by 7 dancers of her Tarab dance company, and the charismatic Sufi singer Sheikh Ahmad Al-Tûni unite for an artistically audacious performance, as Sheikh Tuni’s repertoire has never before been transposed into female dance drama.

Ahmad al-Tûni is one of Egypt’s last great Sufi singers. His voice rises and intensifies, leading to Sufi trance, an ancient ritual for all. Open, creative, expressing a large range of emotional behaviors, Ahmad al-Tûni sings, mimes his poetry with expression ; his nervous body balances to the music and emphasizes the rhythmic fierceness of the dûff, the riqqand the tabla of Egypt.

Al-Tûni’s lyrical and voluptuous chanting and Béatrice’s intense and majestic dancing join to celebrate divine and human love, ecstatic joy, desire, sweet or bitter passion, the sufferance of being separated, the fear of absence and the feeling of surrendering of the body.

Both evoke tarab or emotional ecstasy.

“ What a discovery! Moving Sheikh Al Tûni: its strong and major voice which contrasts with its frail stature…Its wobbling if attaching… The musicians attractive and were also enthusiastic and fascinated by the power of the dance… Splendid costumes…Divine dance in a perfect connection with the voice and the words of Sheikh Tuni… That curled sometimes an almost magic anticipation…”

" It was the swirl, the splendid mixture voice/gesture, the incarnation of enthusiasm. The result: deeply moving… “That stuck”, that turned, that vibrated…”

“Splendid spectacle! It was in turn upsetting, intense, impetuous….What a capacity of improvisation of the dance with the voice of Sheikh Tuni! Which connection with the musicians, deeply invested in the follow-up of the dance and an obvious joy… Which inventiveness, which anthem with the Life mixed with the surging crossings with the suffering…”

“So much emotion, so much fire! Such an amount of power, so much accuracy in the waltz of the movements, the bewitching dances… That of daring originality in this explosive meeting of the dance of Beatrice Grognard and the song of Sheikh Tuni. An unexpected, improbable meeting and, with final, a challenge more than successful…. ” 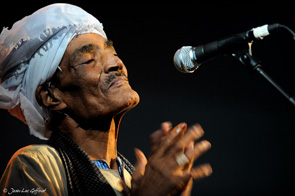 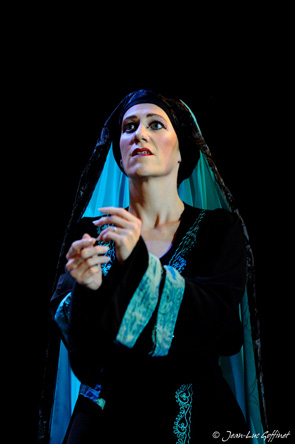 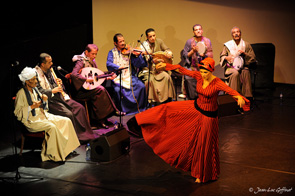 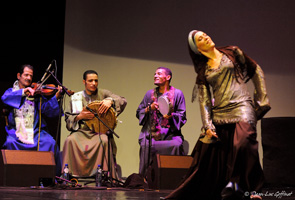 Sheikh Ahmed Al Tuni died on March 17th, 2014. But its singing and its soul continue intensely. 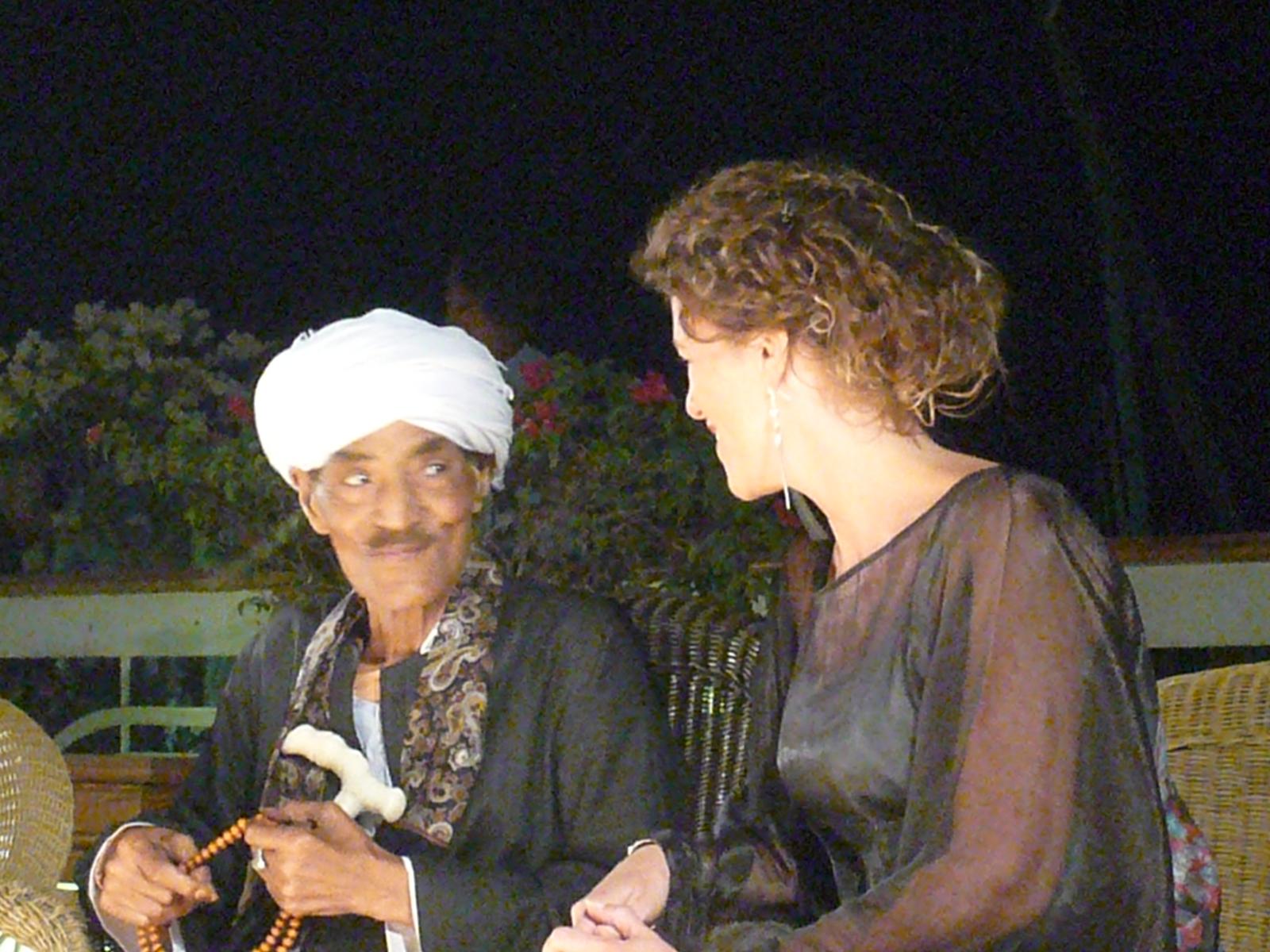 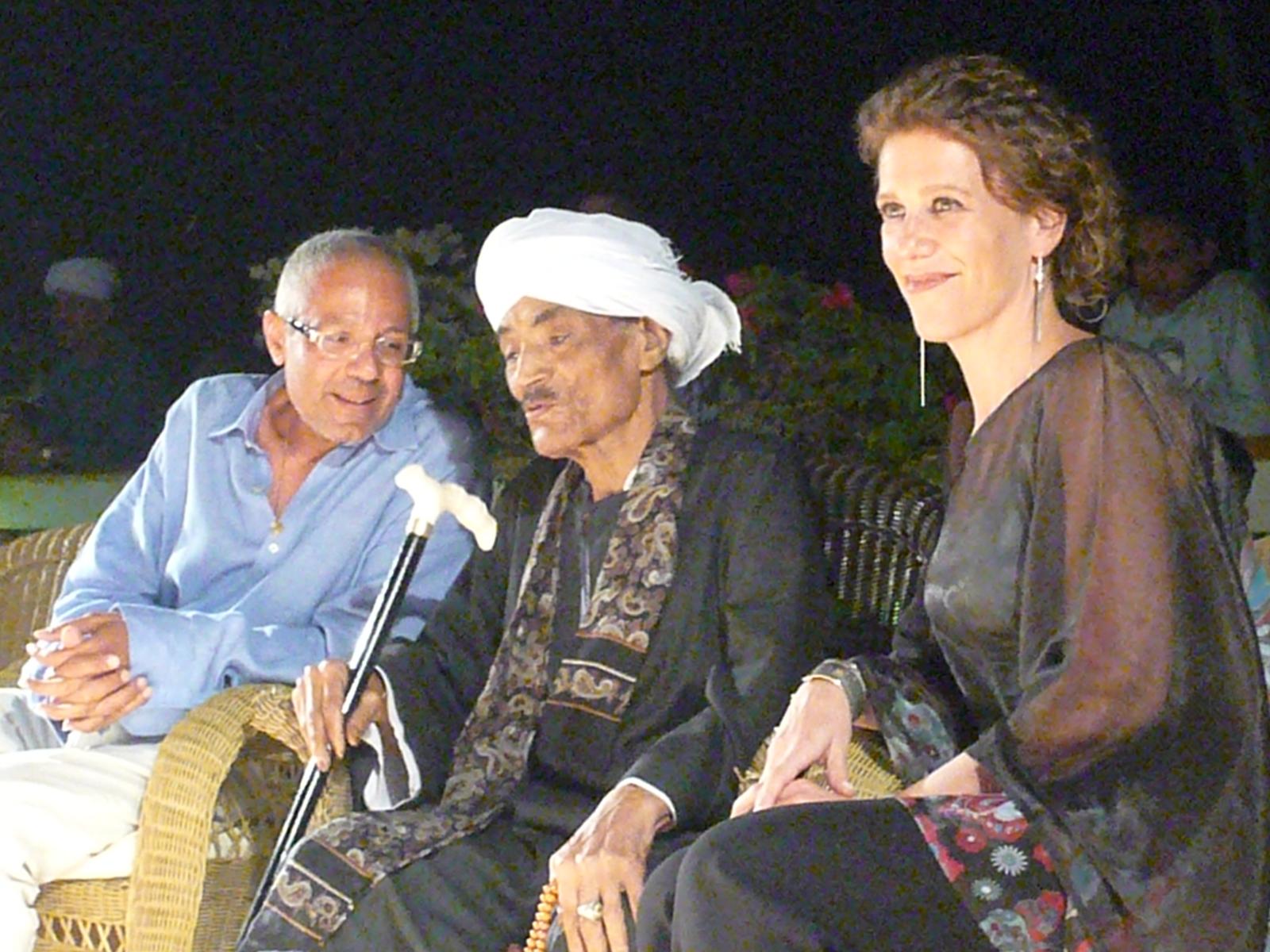 Performance of music, song and dance from Upper Egypt

With The Musicians of the Nile and Béatrice Grognard & Tarab company

In “Mousaferoun”,Béatrice Grognard,accompanied by 5 of her dancers, is reunited with the renowned « Musiciens of the Nile » of Luxor.

Majestic and revered, the « Musicians of the Nile » owe their origins to a caste of professional musicians linked to gypsy clans who settled in Egypt in the XI century. They are the virtuosos of instruments such as the inventive rababa, violin made of horsehair, coconut and fish skin, the arghûl, a bewitching double-piped clarinet made of reed, the mizmâr, wood from Upper Egypt with incisive sounds and the invigorating saïdi drums, the duff and tabla, percussion instruments.

A unique artistic complicity unites the dancer and choreographer, Béatrice Grognard, with the “Musicians of the Nil”, who are delighted to see their secular music glorified by the polished movements, the dramatic expression and emotion which is at times internal, and then trance-link characterising the dance of his artist.

A show of dance and of music from Upper Egypt, revealing a unique meeting of East and West, where the traditional and modern, instinct and technique, melancholy, humour and intense joy, all blend together in harmony. A constant dialogue between the dancer, musicians and singers, an abundance of brilliant colours and captivating rhythms. 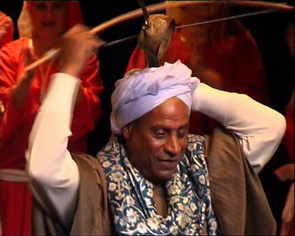 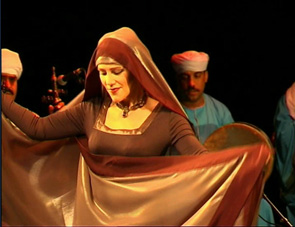 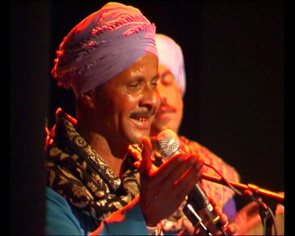 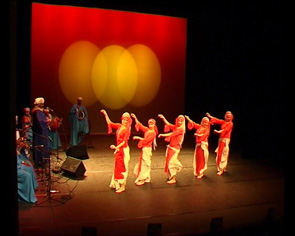