A window on Egypt

Among many other Egyptian objects, which Christie's offered on June 8th, in their sale in New York, was an extraordinary piece. It represents a fragment of painted linen cloth, dating from the end of the XVIIIth / beginning of the XIXth Dynasty, (about 1300-1200 B.C.). It measures 48cm in length and it is in a surprising state of preservation, having retained the original vibrant colours. The quality of the drawing, the sharpness of the features, denoting a surety of hand, make of this piece, definitely a masterpiece.

This fragment was found, with some others, in 1906, in the remains of a chapel dedicated to Hathor, in the temple of Montuhotep which adjoins the one of Deir el-Bahari. Since this date it was displayed in the USA, at the Heckscher Museum of Huntington, N.Y, who released it to make other acquisitions. 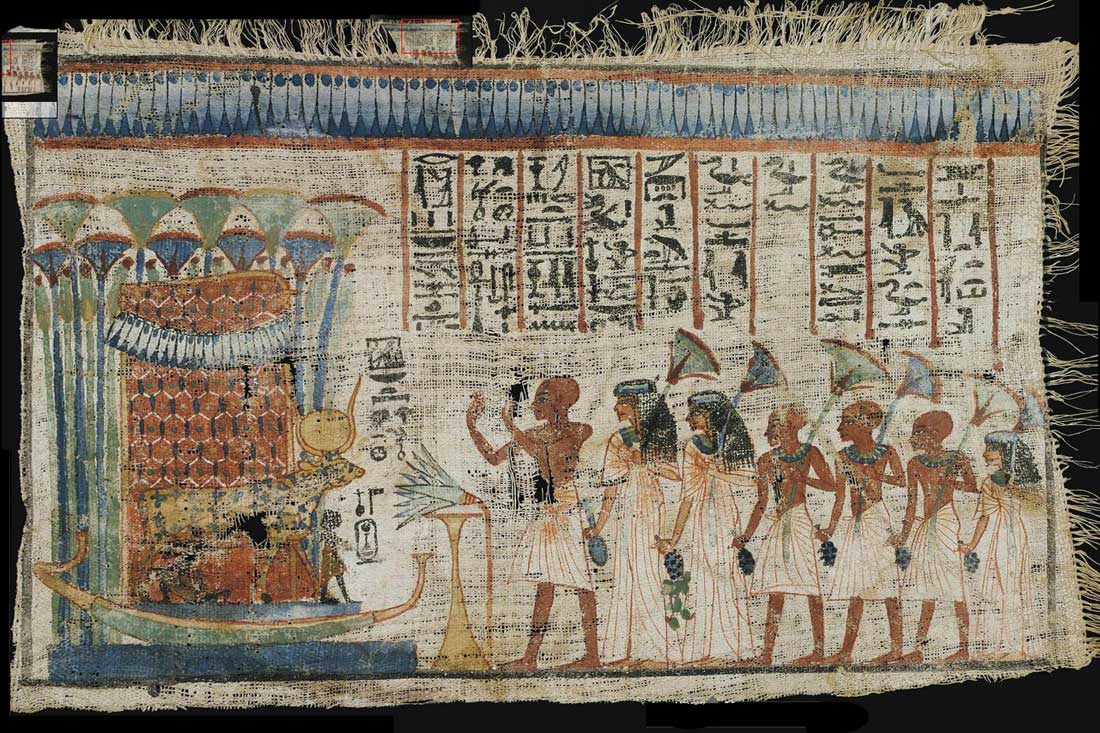 The scene shows a man with the name of Tjanefer who, accompanied by his wife, his step mother and his children, pay homage to the cow goddess, Hathor, designated as "Hathor, lady of the sky, ruler of Thebes" (view here). The goddess stands on a barque, in the middle of the papyrus undergrowth, evoking the primordial swamp as well as the amniotic fluid. Hathor thus plays the role of 'surrogate mother' who will gather the dead to her breast to make him be reborn. Her role of great nutrient cow is illustrated by the image of the Pharaoh, crouching down, suckling her udder. In front of her is another sovereign, standing, or rather his statue covered of black asphalt. This represents the "Perfect God, Neb-Hepet-Re", Montuhotep II. The cult thus refers to the founder of the first sanctuary in Hathor at the same time as to the goddess.

In front of the scene is a pedestal with a large open lotus flower, another symbol of rebirth.
The second part of the scene consists of Tjanefer followed by her family. The father, shaven skull, is clothed merely in a loincloth and doesn't wear any jewelry. He raises his two hands, palms forwards, to adore the goddess. All the women wear long dresses of thin linen, whose upper part is slightly orange, a large necklace as well as a long wig surrounded with a headband. The other men have the shaven skull, as their father, but wear a necklace. All characters carry a large umbel of papyrus which rests on the left shoulder, and in the right hand a cluster of grape, except the wife of Tjanefer who holds a blue vase with a long neck.
Above the group is the following text, in ten columns (view here): "Making adoration to the Lord of the Two Lands, kissing the ground (for) the Chieftainess of Thebes, that she may give Life, Prosperity, Health, Alertness(?), praise/favour and love for the Ka of the Greatly Favoured One of Hathor, Tja-nefer; his sister (i.e. wife), the Lady of the House, Mer(et)-Nubet; her mother Sen(et); his son Huy; his son [the blank surface here was never inscribed]; his bodily son whom he loves, Ma-huia; his daughter, whom he loves, Tit-Imentet".

CAIRO — Egypt’s massive new museum for its famous antiquities now has a power plant, a fire station and its own conservation centre, and over the next two years it will become home to some 100,000 artifacts, officials said. A partial opening for the 120-acre museum complex, which will house King Tutankhamun’s famed mummy and golden burial effects and a replica of his tomb, is set for the fall of 2012.

Plans for the museum, which will replace the century-old building visited by millions annually in Cairo’s heaving downtown, were first conceived in 2002 and it will display more than twice as many artifacts as its predecessor. The museum will eventually house 100,000 artifacts, said Mohammed Ghoneim, the project’s technical consultant said. Tens of thousands of artifacts are locked away unseen in the old museum due to lack of space to display them.

The first two phases of the $600-million Grand Museum of Egypt, which is located at the foot of the Giza pyramids, was completed this week. The main achievement so far is the construction of the new conservation centre to restore damaged antiquities and already 122 conservators are restoring and preparing 6,800 artifacts that will one day be showcased in the Grand Museum.

A documentation unit is also working to create a computerized database for all the artifacts.

The conservation centre is “designed to be the largest such centre in the world, in terms of the services it offers and the number of laboratories,” Ghoneim said. “It is built to restore Egyptian antiquities but also to be a regional conservation centre.”

Established with Japanese technical assistance, the centre includes 12 laboratories for restoring, scanning and studying mummies as well as artifacts made from pottery, wood, textiles and glass. Japan has provided a $300-million loan for the museum, while the Egyptian culture ministry will provide $150 million, officials say. 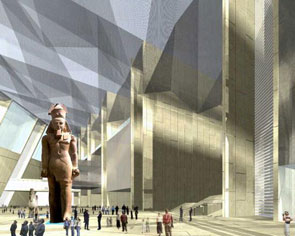